My friend Noreen hosted a cake decorating party this weekend. 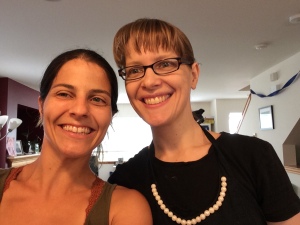 Noreen and I go way back.  She was my supervisor when I worked as a program assistant at the Hearing Speech and Deafness Center right before I went to grad school.  Obviously she was a super awesome spectacular supervisor because we also became great friends.

I’m pretty proud of myself because it was the second Saturday in a row that I woke up early to bake 🙂  My contribution to the party was cupcakes.

I didn’t take pictures while baking these #shamefulblogger but I got the recipe from Martha Stewart (man, she’s a gem), and they’ve received a number of compliments, so there’s that.

I have to say, Noreen outdid herself with awesome tools, yummy snacks, and delicious coffee 🙂

Those fish were AWESOME, she’s definitely an artist!

Maggie and Noreen made this M & M/Sprinkles/Fondant beauty 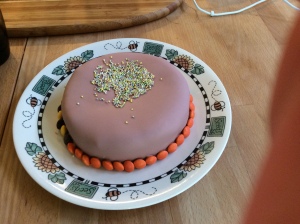 Mine was inspired by Alice in Wonderland eat me cake

Pretty simple, and I’m happy with how it turned out and tasted!

I had such a wonderful time, good laughs, good talks, and good food 🙂  Hope you had an amazing weekend!