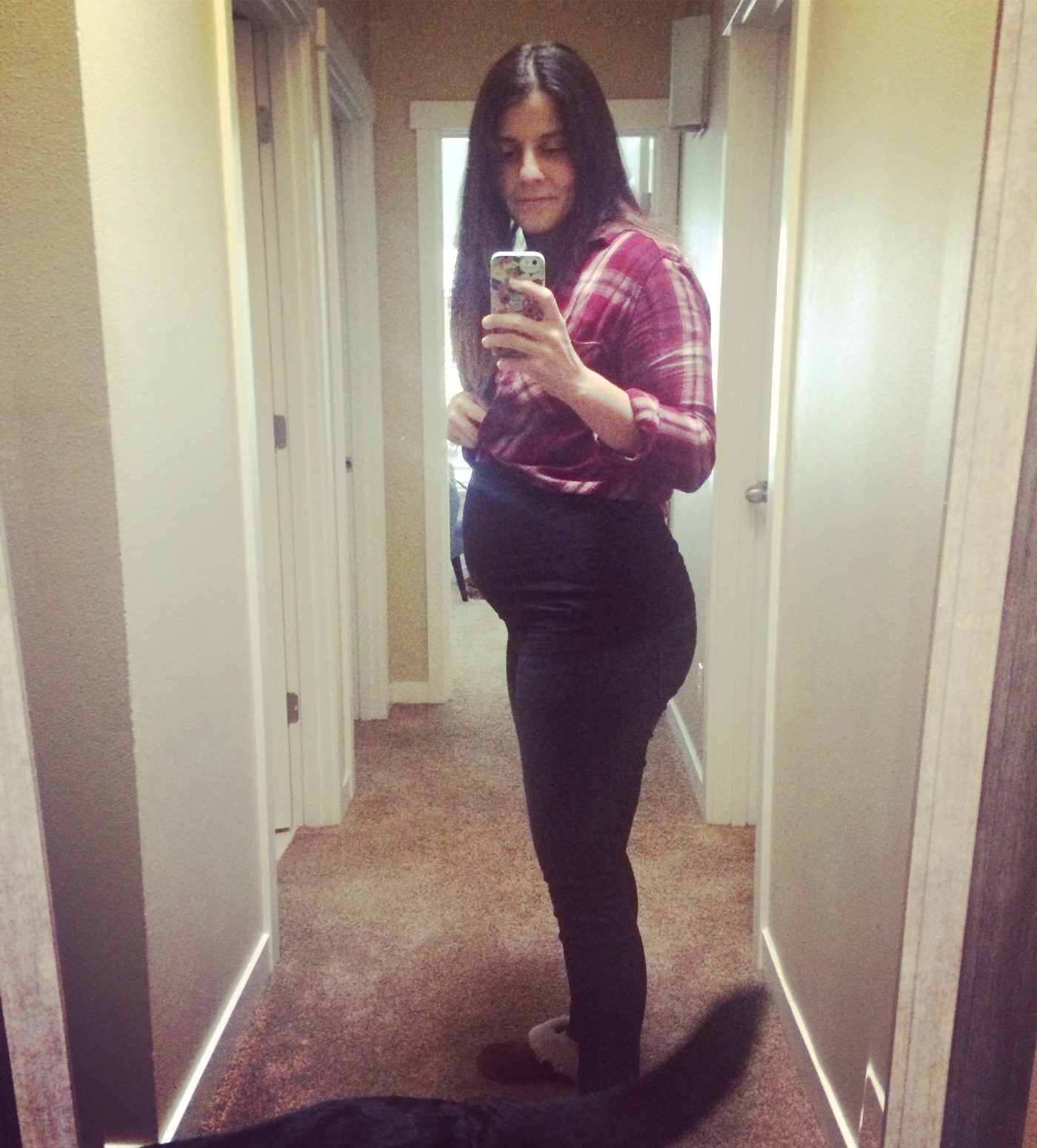 I recently read a post written by one of my favorite bloggers ‘Peanut Butter Fingers‘ in which she discussed a recent miscarriage she had and after weeping for about 15 minutes I wiped my tears and thought to myself, “why haven’t I written about my experience?” I think  I haven’t written about it in part because there are such a range of feelings that come with this kind of experience and I wasn’t sure I had sorted through these feelings until recently (thank god for therapy).

Let me start at the beginning…

We found out we were pregnant in December 2014, after asking around for suggestions I found a clinic that had me come in at 6 weeks just to double check if I was pregnant. We got a ‘yes’ and they wanted me to schedule a 12 week appointment, but I felt really weird about waiting that long. They assured me that it was routine, but I decided to go with my gut and schedule with another clinic. They got me in at 8 weeks and I loved the doctor! When we went into the appointment we were ecstatic; the excitement quickly faded when the wand was in place and there was no heartbeat and a sad look appeared on the nurses face. They had us do a more in depth ultrasound (waiting + ultra sound took about 3 hours) and still it remained, we had lost the baby.

We were so thrown by news, sad, confused, and by that point tired. They told us we had two options: an insertable medicine to induce contractions, or a D&C. We chose the medicine because it reduced the risk of scar tissue on your uterus. That was a mistake, essentially I went through labor but with no baby to show for it. It was horrible pain, we were up for 8 hours, I laid all over the house (couch, bed, toilet) and dave laid right by my side, on the floor holding my hand the entire time. It was a nightmare.

We really didn’t even think about trying again for another 8 months after that. During that time we had decided to move down to California and try out a new chapter in our lives. Once down there we decided to give it a go. **At this point I think it’s important to mention that we have never had difficulty with the conception portion of things, that has always happened fairly quickly. I’ve only met one other person who struggled (at least openly) with recurrent miscarriage, every one else who had a story to share seemed to have trouble with the ‘getting pregnant’ part. While I can’t imagine how difficult that must feel, I found it really hard to feel like I could relate to anyone.** Back to the story, so we tried, and in October of 2015 we were pregnant again!

At 8 weeks we went to an amazing doctor in Newport Beach and we heard our babies heart beat! It was so moving, Dave and I both cried. I called my mom into the room and she teared up a bit too. Things seemed to go fairly smoothly until about 9 weeks when I saw some very faint spotting, I was told that it was no big deal and a little spotting is normal. It wasn’t normal, and at our 12 week appointment the babies heart had stopped and based on the size measured about 9 weeks. This was the 22nd of December, we had a D&C (never again will I inject medicine into my vagina) on the 23rd, and flew to see family later that day. It was a stressful time, on the one hand I was glad to be surrounded by people that love me, but on the other I just wanted to be in my bed at home curled up in a ball.

Dave took this picture of me the day after the D&C (I had to go in for an injection due to my blood type), and while it’s quite sad to look at, it pretty much depicts the way a miscarriage leaves you feeling. Sad, uncertain, hopeless, and defeated. 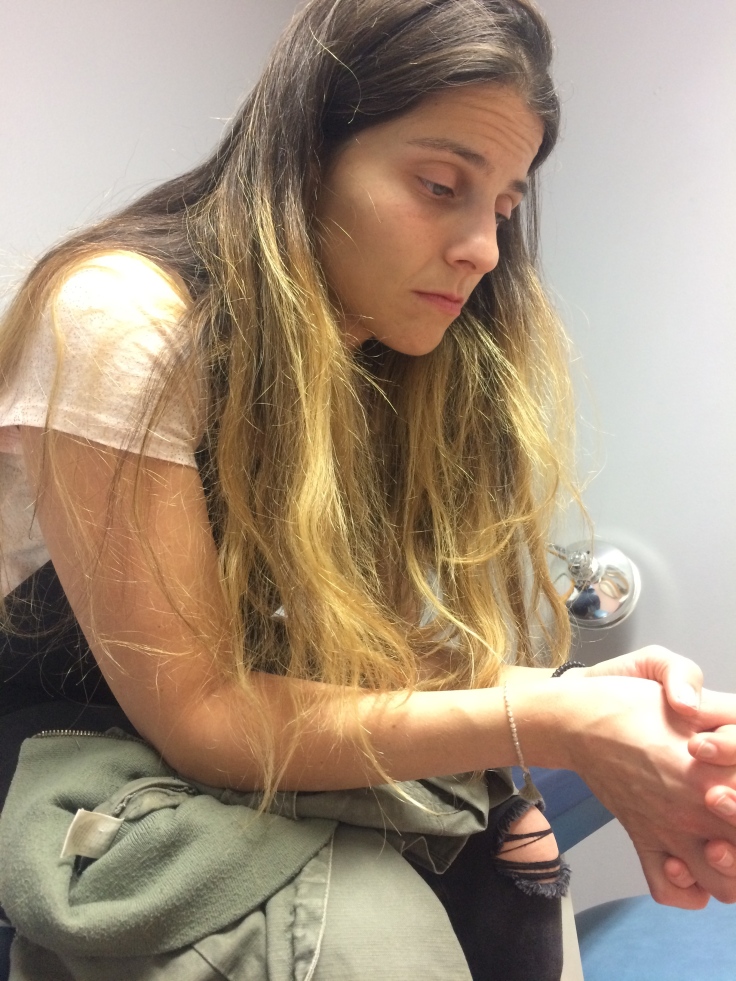 Obviously I had grown attached to that fetus, I had picked out names, made a registry, etc. But I honestly think the hardest part was knowing that it had been dead inside me for three weeks. That’s something that never leaves you.

Dave and I are nothing if not persistent. We gave ourselves three months to heal both physically and emotionally and tried again. We were pregnant, and at week 6 we miscarried. The saving grace about that miscarriage was that it was natural, I didn’t have to choose between the horrible medicine or surgery. But still it was miscarriage number 3, and for a 30 year old that’s odd. We went to the doctor and this HORRIBLE nurse practitioner said, “So when will you try again?” I started crying and said “Are you kidding? I’ve had three miscarriages, I want answers, why is this happening? What’s going on?” At that point she decided to send me to a fertility specialist, which was something that I am so thankful for because that’s where I met Dr. Sharon Moayeri. While I had already had quite a few tests run, Dr. Moayeri sat me down and made a list of the possible reasons why, the tests that would need to be done, and the solutions for the most likely possibilities. Now if you know me, then you know I’m a list person.

We did all the tests and the only thing we really found out (which we already new) was that the second miscarriage was chromosomal, so most likely that was what was happening. At which point our only option for further testing is to do IVF, pull a certain number eggs (say 10), combine them with sperm and see how many test chromosomally normal. Then that maybe gives you your odds.

Dr. Moayeri was so amazing and kind, but during this time we decided to move back to Seattle. She recommended a colleague she studied with at Stanford who was located in Seattle and we felt really good about that.

We made an appointment with the new doctor and reviewed what IVF would look like and how much it would cost. We looked at our calendars and things just weren’t lining up, it wasn’t going to work in October because we had a wedding in November, we couldn’t do it in November because we had Christmas and a wedding on New Years. So we decided to wait until January 2017 to kick off the new year.

In the mean time, we decided to try on our own and we got pregnant again, and here we are at 25 weeks.

You never forget a miscarriage, and I was nervous for the first 12 weeks of this pregnancy (and it still pops up every now and then). But what I’ve learned through this whole experience and my work in therapy is that one thing we don’t allow ourselves enough of is the opportunity to be sad, anxious, mad, or frustrated. It starts in early childhood, you fall off a bike and start crying and someone rushes to your side saying “It’ll be okay, don’t be sad.” I believe that if we just allowed ourselves to feel those feelings without shame or judgment, life becomes a lot easier to handle.

Pregnancy will never be normal for me, as it hasn’t been for a lot of people. My heart goes out to anyone who has experienced any difficulty with pregnancy, or to anyone who is in a position of being pregnant and does not want to be. These decisions are so hard to make and our society does not make it easy on any of us (especially now). Know that I have your back, it’s your body your choice.

One more thing, if you know someone who has had a miscarriage and you want to support them, this article has some great suggestions. It’s such a difficult time and everyone responds to it differently.

One thought on “Pregnant After Three Miscarriages”