It’s the time of year when soup sounds amazing to me ALL the time. The temperature has been in the low 30s in Seattle, and although I know there are places that are much colder, it’s just down right frigid for this PNW girl. So soup it is.

I think I mentioned this already on the blog, but during my pregnancy with Mira my body started craving meat. It was a shock to my system to crave meat after 13 years of not eating any; however, I felt I needed to listen to my body. It was a real Pheobe moment.

Oddly enough during this pregnancy I haven’t craved meat as much, as a matter of fact at times it repulses me. I think the ups and downs of this are really playing with Dave’s emotions; however, he is super supportive no matter what.

We’ve been playing with a variety of vegetarian recipes, but like I said, lately I’ve been craving soup. For this recipe I took inspiration from Jillian Michaels’ app and made a few modifications. It is extremely tasty – Mira gives it two arms up (she’s not quite doing the thumbs yet, and most food ends up on her head). I also think it would make a great freezer meal, which is a great thing to learn about during pregnancy.

This soup was a big hit with the whole family (Mira has had two big bowls – yay for toddlers eating vegetables).

The recipe is vegan, gluten free, and high in protein, which is awesome because it helps this pregnant lady feel full.

I’ve been craving the heat throughout this pregnancy, and what I love to add to this dish is my nonna’s peppers. I haven’t tried my hand at making these peppers yet, so I will cherish this jar until it is no more. Dave and I are pretty excited to give it a shot and I’ll let you know how it goes.

A little bit goes a long way when it comes to nonna’s hot peppers, so watch yourself. 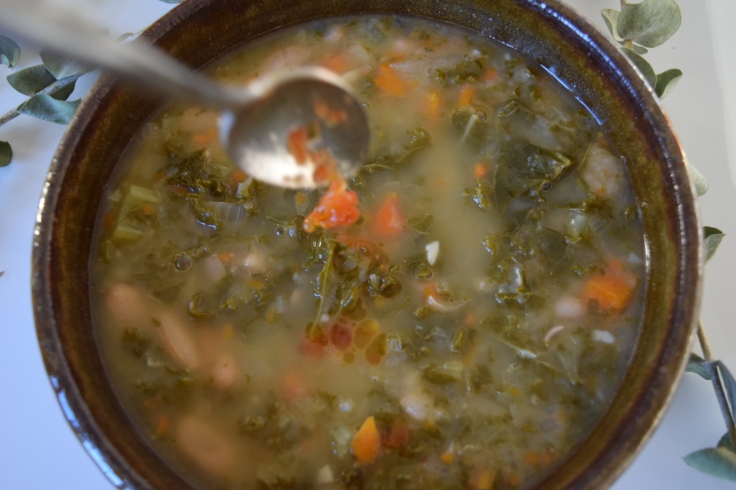 *if you prefer a smooth soup at this point you can slowly blend portions of the soup by 1.5-2 cups at a time.

I highly recommend that you make this soup to get you through the cold winter months! 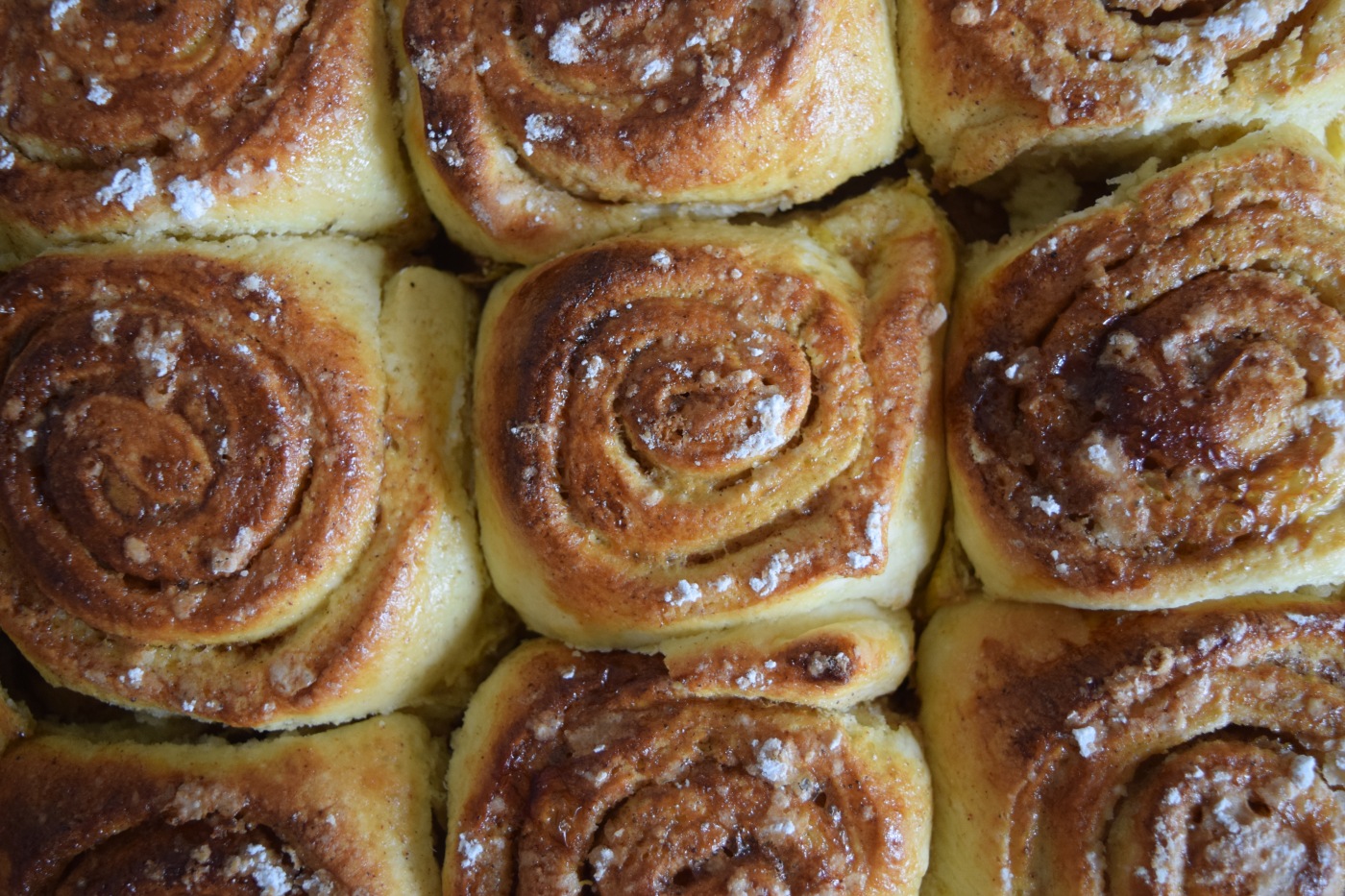 I have to admit that I’m a sucker for a good nordic concept that gives me the warm fuzzies. First it was hygge, and now it’s ‘Lagom,’ the concept of ‘not too little, not too much.’ I completely devoured Niki Brantmark’s book.

It is now sitting in our living room (it helps that the cover is adorable) and the other day I was flipping through and came across a yummy looking cinnamon bun recipe. Moment of baking inspiration + Mira’s nap time = time for some cinnamon buns!

There is just something about pouring flour into a bowl that really gets me. The *thunk* once it hits the bottom. The incomparable softness. I would love to lay in a pool full of flour.

Butter….not so much. I really dislike working with butter. Once it’s softened it sticks to my hands and the knife. I never feel as though I’m ‘cubing’ it quite right.

Somehow, the dough ball is created.

I can definitely find some beauty in every step of the process. Although, not when I dropped the bottle of rice vinegar and it smashed all over the floor. 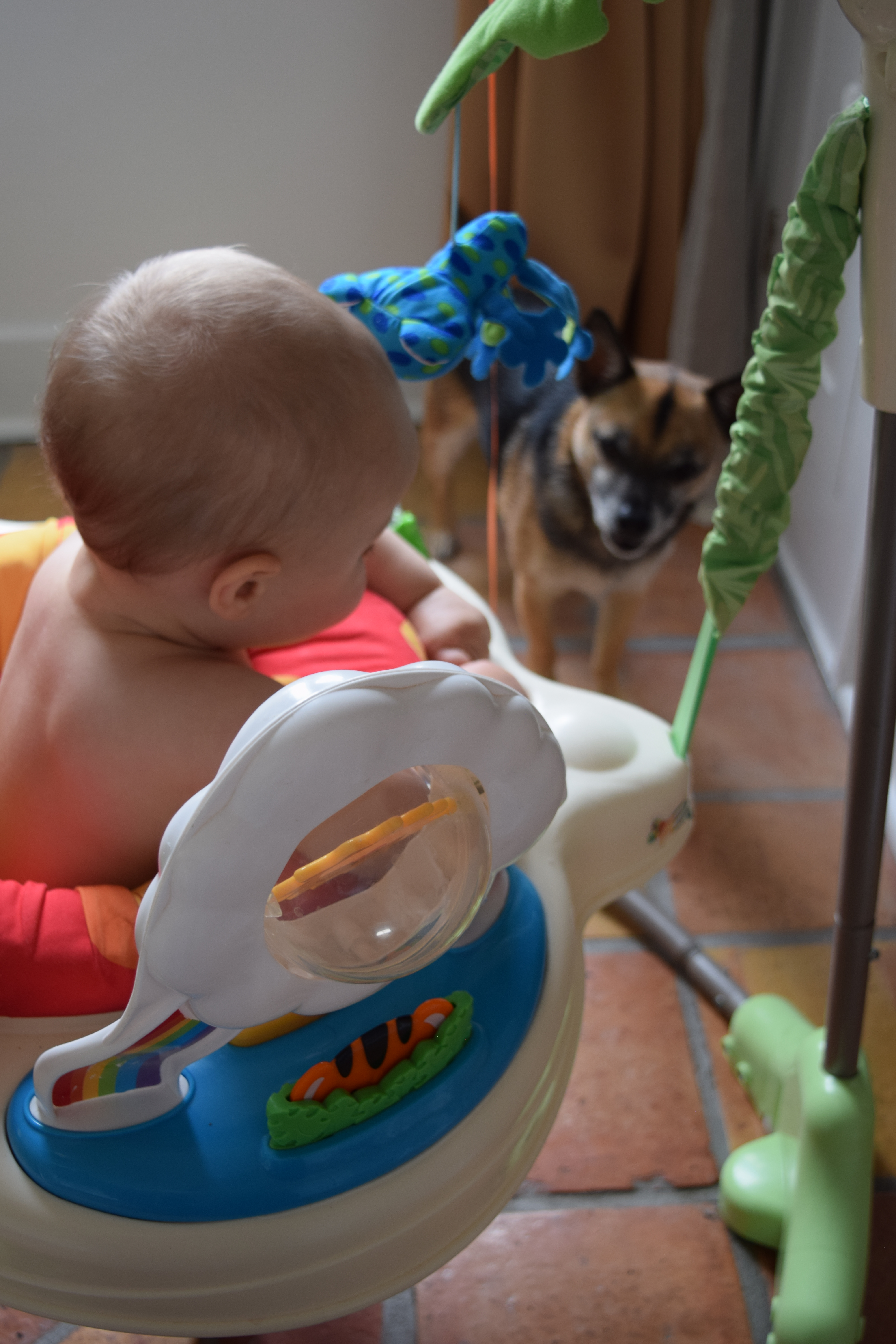 Mira woke up at some point, but she was happy to hang out while I baked (gotta love her growing autonomy). 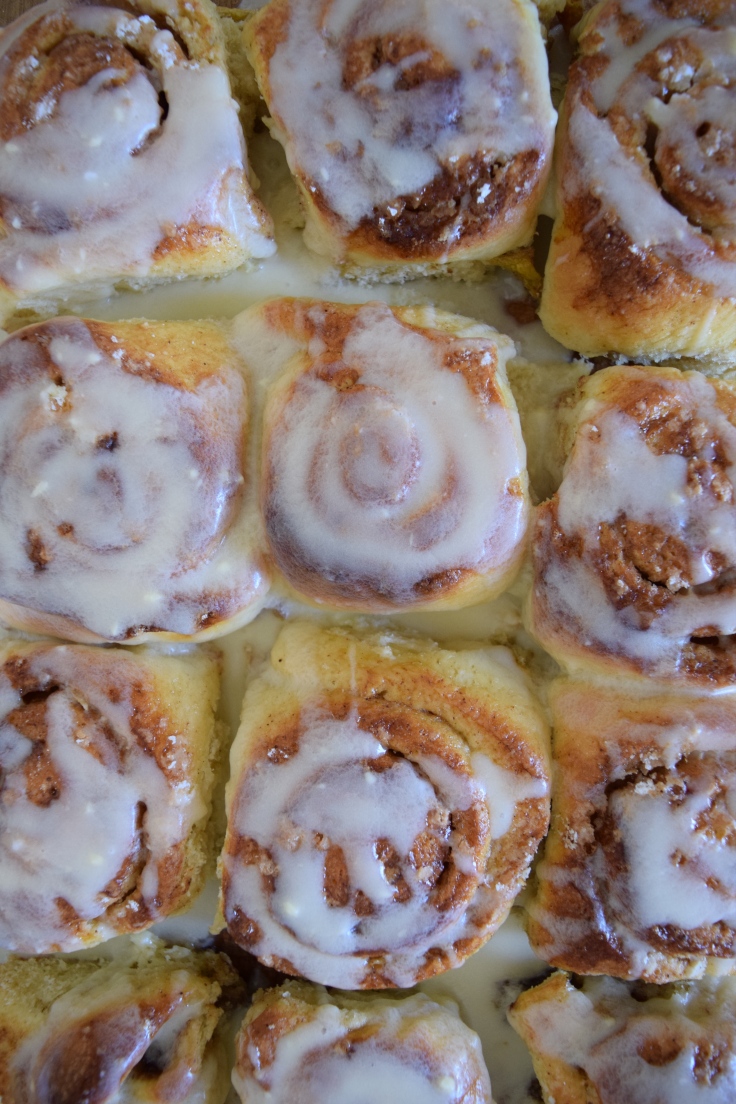 But hear me out….because this dish is uhhh-mazing.

Before we get to the food, let’s just have a little moment about using healthier food items in place of the usual ingredients. I think there is a lot of upset surrounding this because the ingredient that is typically used (in this case rice) gets stigmatized as being ‘unhealthy.’ That is absolutely not the intention.

As a mother of a little girl, I am extremely happy about the #bodypositive movement. I think first and foremost we should love ourselves and not try to be anything other then, well, ourselves. I always tell myself, ‘I’m not trying to be like anyone else, I’m just trying to be a stronger/better version of me.’ This is a little reminder not to compare myself to anyone else. As a person who has suffered from body dysmorphia and eating disorder in the past, it’s an important thing to remember. I want Mira to know that her mama loves herself, and thus help her love herself (always). It is also important to remember that having goals does not mean that you don’t love yourself. Desiring to eat cleaner, move more, and feel better at the end of the day, does not mean that you don’t love yourself. I know that when I strive for those things I feel happier/healthier. In life I always want to have goals surrounding growth whether that be in my career, family, health, friendships, etc. I started this year with a goal of moving towards a plant based diet, and this recipe has been one of many that I’ve tried and loved. 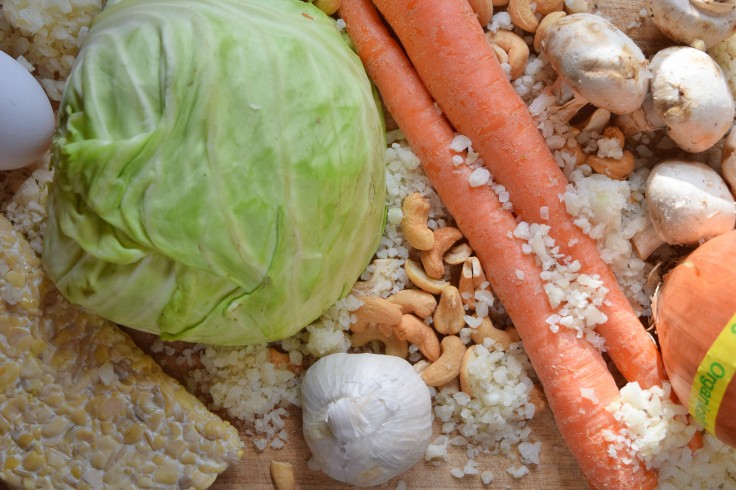 So in this recipe we use cauliflower in place of rice, which can be considered a healthy swap. It’s helpful if you have goals for moderation, goals for eating more vegetables, or goals for eating something super tasty. At the end of the day your goals are, just that, yours and as long as you feel contented in them, then everyone else can fuck off. But why let me convince you, when the food will speak for itself… 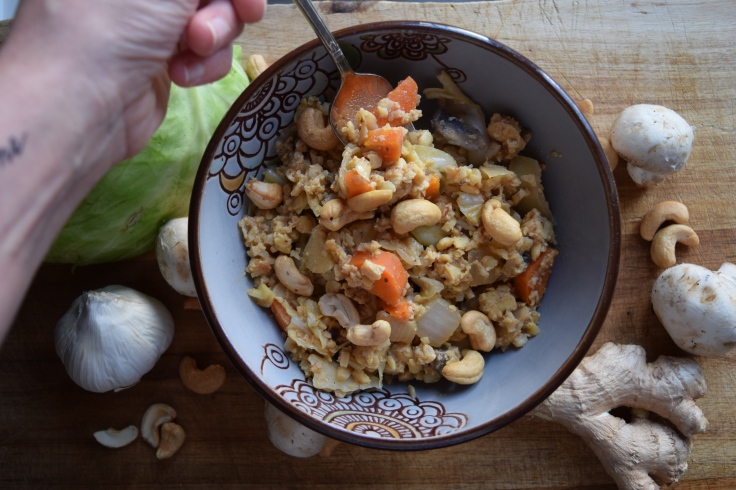 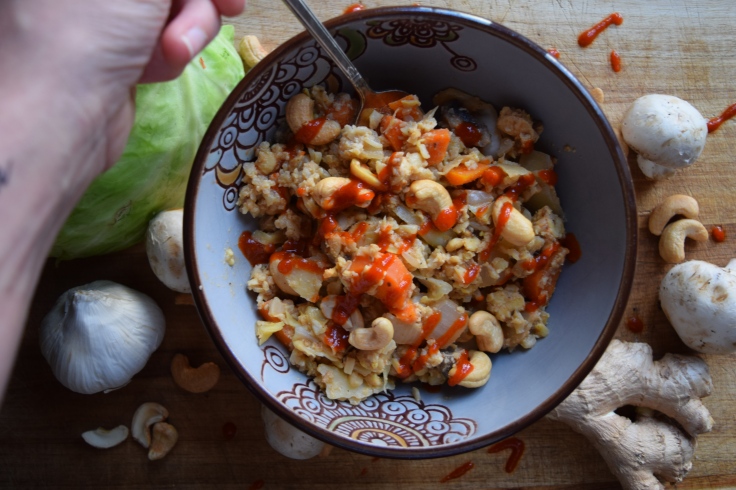 It’s so yummy and filling! 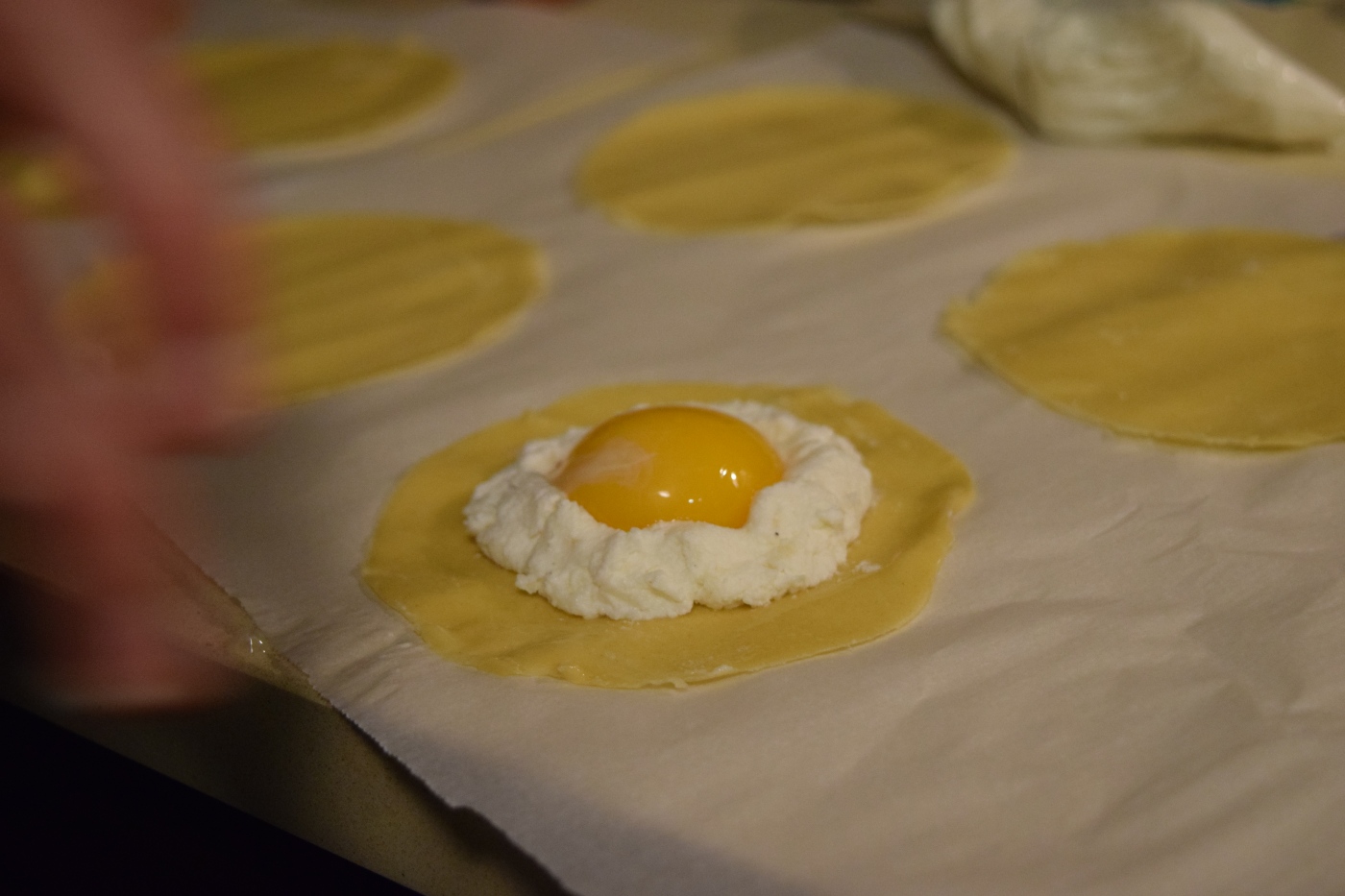 I think I’ve mentioned on the blog before that Dave loves to cook, and when this guy cooks he goes ALL out!  The other day he told me he was going to make Uovo en raviolo, and so naturally I said, “awesome, I’ll invite my friends and you can make it for all of us.”  He freaked out a little bit, but he took it on like a champ.  He used this recipe, and he had a stroke of genius when he substituted pistachios for the pancetta (gotta love a great cook who can be clever with recipe modifications).

The first thing he did was prepare the dough.  He made a beautiful egg well.

And then formed that into a into a lovely dough ball 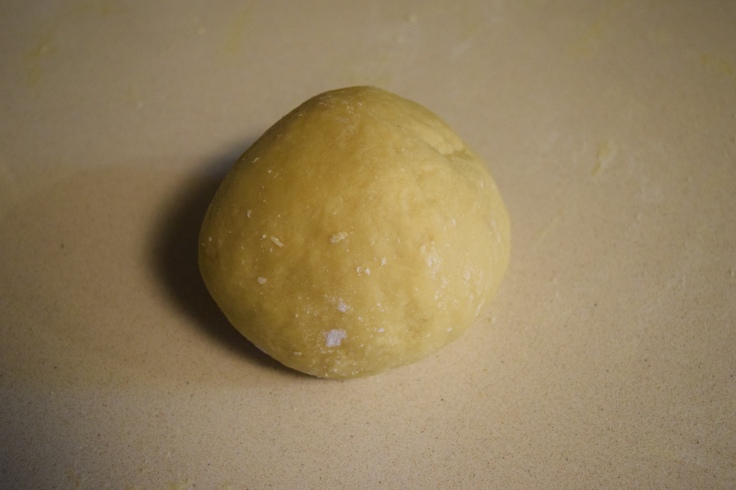 Then we went for a bike ride (needed to work up an appetite).  By the time we got back we needed something to snack on while Dave got things going, so in true Italian fashion we had some rosemary bread dipped in oil.

Dave called upon his sous chef, and I assisted with the dough.

I’m gonna drop a little Italian knowledge on ya, you ready for it?  ‘Raviolo’ is the singular of ‘ravioli,’ and the reason this recipe uses that form of the word is because each raviolo is gigantic and you’re really suppose to have one in a serving.  The filling consists of a ricotta/parmesan mixture and an egg yolk.

There were definitely some tricky steps in the recipe that were good learning experiences for the next time we make them.  You should flour the parchment paper that you put the ravioli on, because if you don’t, once you’ve sealed them they will surely stick to the parchment paper.

While I assembled the ravioli, Dave prepared the sauce. 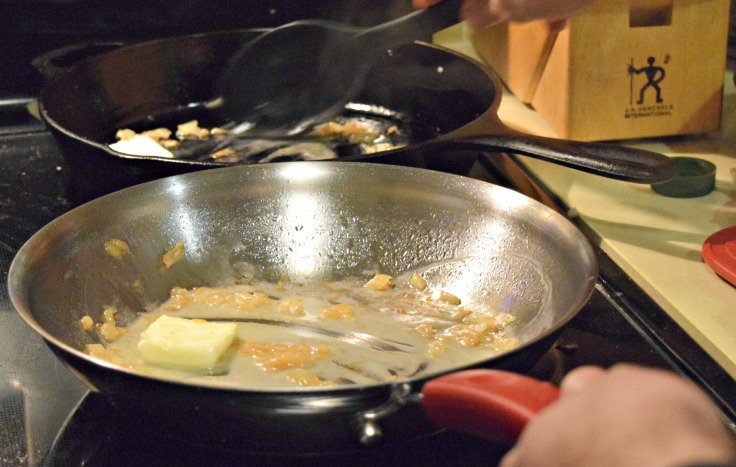 Each raviolo needed to be sauced. 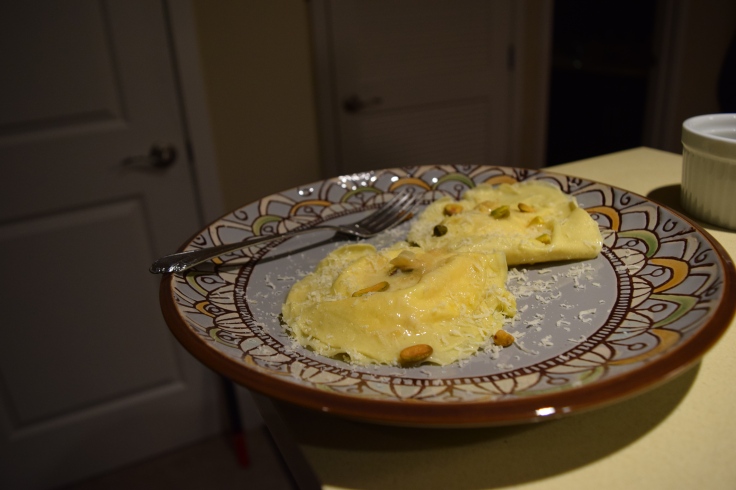 Of course we had some beggars, always hoping a scrap of something will fall to the floor.

They’re so cute it’s hard to ever stay mad at them. 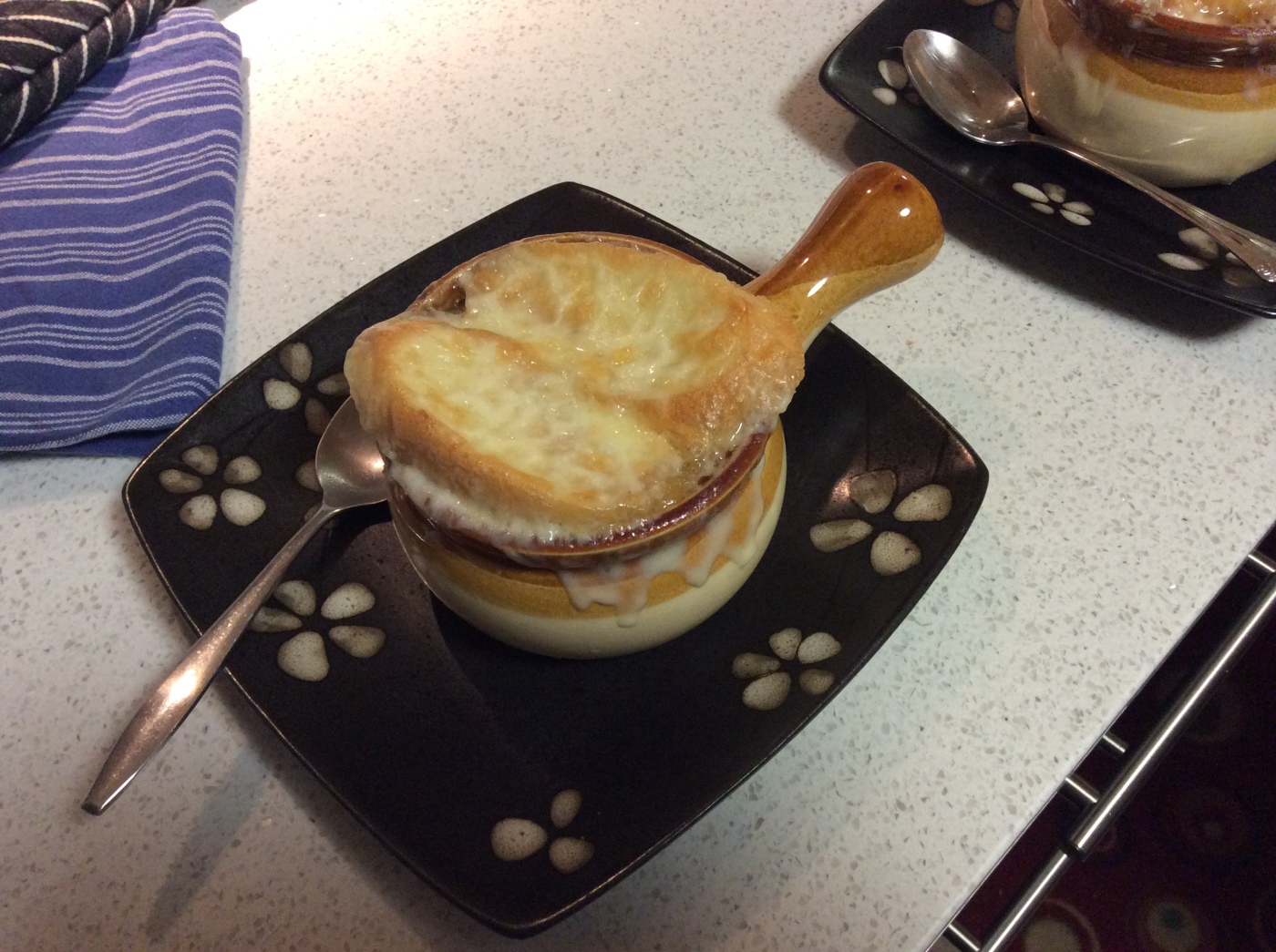 The other night I made French Onion Soup and man oh man was it aaamazing (if I do say so myself).  I wanted to share with you all the order of operations and the edible images (well some of them) that I captured.  I’m waiting until after the wedding (25 days!!) to purchase myself a nice camera.  I’m gonna take that thing all over Japan, and then share all the beautiful images with you!  But I digress.  I used Tyler Florence’s recipe because it was the first one that popped up on my google search which sounded delicious, wooow that sounded super lazy.  Well let me tell you, making this recipe was anything but lazy.

So you start by melting a stick of butter in a large pot:

After that you add onions, garlic, bay leaves, thyme, and salt and pepper. Cook for roughly 25 minutes, or until onions look all caramelized and shiz. 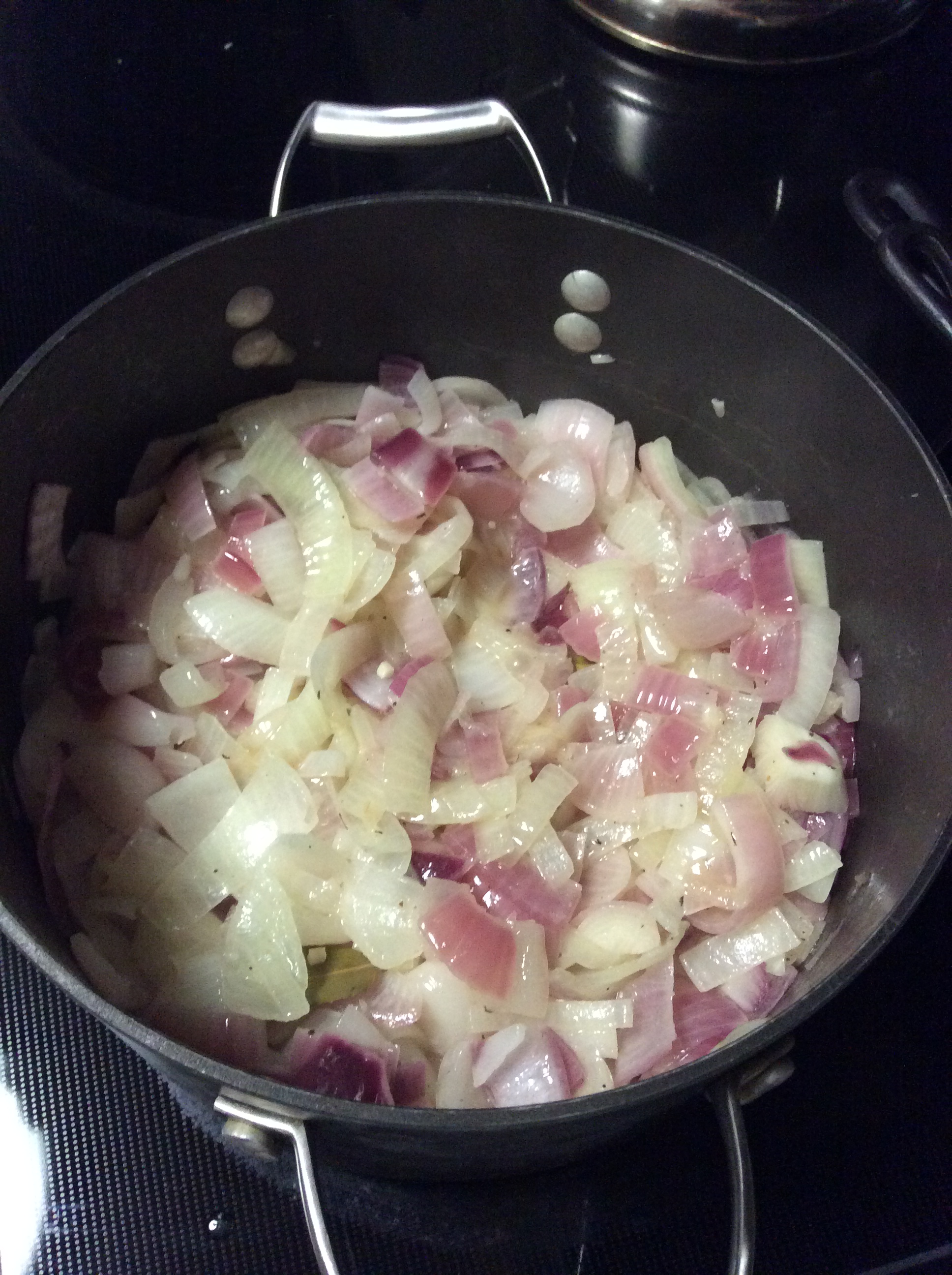 I’m gonna tell you the honest to goodness truth, I sometimes don’t use red onions because I don’t think they’re very pretty.  This time I used them because it was all I had, and honestly, who cares?

After this you add red wine and bring it to a boil.  Reduce to a simmer and cook until all the liquid is gone, or about 5 minutes.

Then remove the bay leaves. 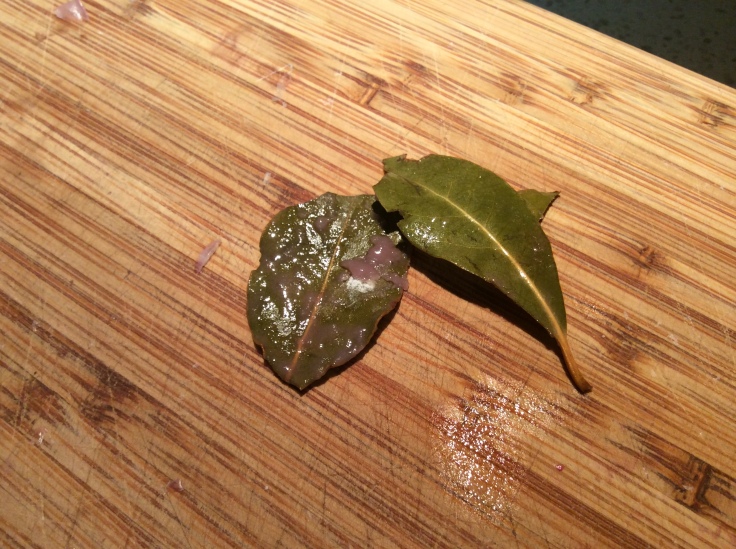 Dust the onions in flour and give them a stir (yup that’s Dave’s hand, he’s a good sous chef).  This is my first time adding flour, and I think it really made an amazing difference.

Turn the heat down to low and cook for 10 minutes to cook off the raw flour taste.

Now add the ‘better than bouillon’ fake beef broth bring to a simmer for about 10 minutes and add salt and pepper to taste.

Now when it’s time to eat preheat the broiler.  I like to place a slice of french bread on top of the soup (in an oven safe bowl) and add a slice of provolone.  Then place in the oven for 3-5 minutes.

I was really happy with how it turned out. 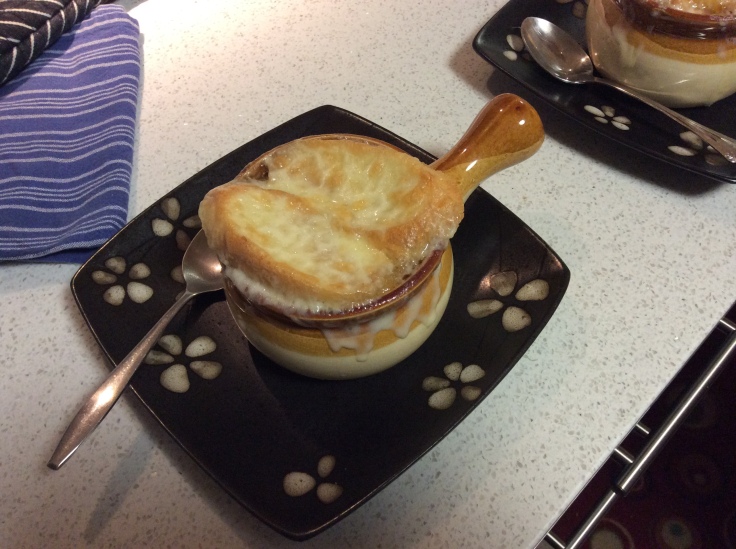 Another nice thing about this soup is that it tastes just as good without the bread and cheese and is roughly 80 calories per cup!